NIGHT DEMON from Ventura County (just north of Los Angeles) have recently signed with Century Media for the world outside of Europe for an early 2015 release.  The three-piece heavy metal act is currently on tour with legendary NWOBHM band, Raven with a long string of dates that go into the holiday season.  See dates below.  The band had this to say about joining Century Media:
“We are very excited to be joining the Century Media family. For years we have seen the CM logo synonymous with great bands and a stellar product. The future looks bright for Night Demon, especially now that we have a solid partnership with such a legendary label.”

They went on to say this about their current tour:
“Touring on our home turf with one of the forefathers of the NWOBHM movement is the highest honor for us! Raven and Night Demon together is the right package for any true heavy metal fan.”

Century Media A&R rep, Daniel Dismal had this to say about the band: “It was a chilly night in Downtown Los Angeles… the date was January 28th 2013, the venue was the Down N Out and the Metal was about ready to kick out the windows of this unsuspecting dive! At the time, NIGHT DEMON was just a name to me, something that sounded cool but I really didn’t know what to expect. From the first 4 clicks of the sticks into the opening riffs I thought to myself, “Woah, what’s this!? I was not expecting this!?” and from then on, I was hooked. Fast forward less than a year later and we see that the self-titled EP has gained an almost cult status, the band has made appearances on various European fests while completing a successful string of headlining dates throughout Europe only to come back home in order to trek across North America numerous times. Within less than 10 months, NIGHT DEMON went from playing a little dive bar to becoming a rising star that spits out high-octane, NWOBHM influenced neck wreckers while exuding an atmosphere of “Yeah, we’re here to get down” during their live performances that are constantly winning over audiences and peers from various different “scenes” and genres. Now, I am proud to announce that NIGHT DEMON is one of my first signings to Century Media Records and not only am I excited for the future, I am stoked to say, Watch out world, the NIGHT DEMON has arrived!!!!”

Last night was an incredible experience for me. I got to see NWOBHM legends Diamond Head along with Raven and new favorites Night Demon in a small club called Malone’s in Santa Ana, Ca. Even though I was having some insane upper back pain, I was determined to see this show and I’m so glad I did. There definitely could have been more people there, but it was a weeknight and things were running behind as Diamond Head went on about an hour late at around 12:45am or so (they were supposed to be on at 11:40). However, despite the recipe for a bruised ego, these bands played as if the place was packed.

The wife and I arrived shortly after Raven started their set on the main stage. I must admit I’m not as familiar with this band as I should be, but those guys definitely put forth a lot of energy and impressed me for sure. For being a trio, there was a lot of power being put forth from these guys. Let’s face it, they aren’t exactly young anymore; yet they put forth more energy than I see from some of the younger bands today. And those screams….holy crap! I had to look around to see if glasses were shattering at times. I must admit I’m not a huge fan of the shrilly King Diamond-like screaming, but I know that isn’t exactly easy to do consistently and takes quite of bit of talent to pull of right. So they still get the horns up from me.

When it came time for Night Demon to play the bar stage in between Raven and Diamond Head, I was pumped. I am thoroughly familiar with their current four-song release but shorty before they began it occurred to me that I might get to hear some new songs, which I did. They played three songs that I heard for the first time; ‘Heavy Metal Heat’, ‘Satan’, and another one they didn’t say the title of. Based on those songs, I cannot wait until they come out with their full-length release next year. However, I do think that the band might benefit from having another guitarist at live shows. In no way am I saying anything bad about how it sounded, I just think an added rhythm guitarist would add to the sound and make them even more amazing then they already are. Regardless, they put on a great show.

As for Diamond Head, I was completely blown away. Even though the band was without their usual frontman Nick Tart, their fill-in vocalist Chas West threw it down better than any vocalist they’ve had in the past. Of course, that’s just my opinion. Regardless, anyone who may be skeptical about seeing these guys with a fill-in vocalist needs to quit worrying because I guarantee they won’t be disappointed. They played all the songs one might expect from these guys; ‘It’s Electric’, ‘Helpless’, ‘Sucking My Love’, ‘Lightning to the Nations’, ‘Am I Evil?’, etc. The band had great energy and Chas added an element to the band that is nothing but positive. You can check out multi-cam footage of them performing ‘Am I Evil?’ in San Francisco below along with the remaining dates on the tour.

Special thanks to Jason at Homeless One Productions for his hospitality. 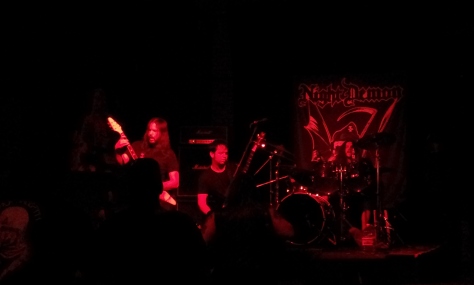 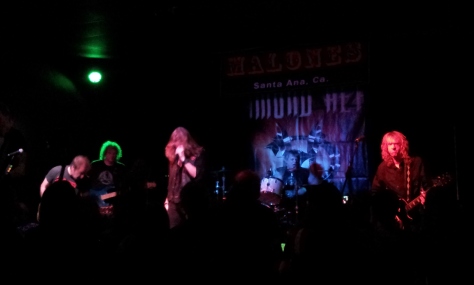 Here is the official statement from the Diamond Head camp:

“DIAMOND HEAD wish to send [singer] Nick Tart and his family their sincere condolences on the untimely death of his father. As a result of this, Nick will be flying home to Brisbane to be with his family and, unfortunately, has had to withdraw from DIAMOND HEAD‘s upcoming U.S. tour in October.

“In order to maintain their commitment to their fans and the tour, DIAMOND HEAD have called upon vocalist Chas West (JASON BONHAM, LYNCH MOB, TRIBE OF GYPSIES) who has been a longtime friend of the band to help out for this tour. DIAMOND HEAD are delighted to have Chas be part of this upcoming tour, which kicks off in Vancouver on October 8th.”

For a complete list of tour dates click here. If you plan on going to the Las Vegas, Los Angeles, or Santa Ana dates then you better check out Night Demon or you might be overcome with an overwhelming sense of regret at some point. 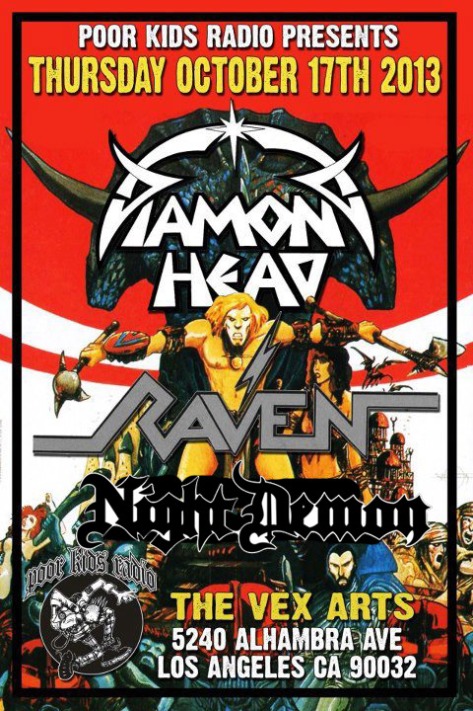 Well, it’s Friday (the 13th) and it’s time to bring you another Friday Find. Today’s find is Night Demon out of Ventura County, California. If you aren’t aware of these guys then you should definitely allow yourself the privilege. However, in order to truly appreciate this band for what they are, it helps to be familiar with the NWOBHM sound and the bands that were a part of it during the late 1970’s and early 1980’s. If you are familiar with that genre, then Night Demon will sound like home to you. What’s great is that this is a brand new band, so there is actually a chance to see them live, as opposed to the vast majority of NWOBHM bands that just withered away. They are actually playing three shows with Diamond Head and Raven this coming October, you can get all those details here. But enough reading, it’s time to expose you to some music from this great band. You can check out the video for the song Night Demon below as well as stream their 4-song debut release. Enjoy!

It has been revealed that NWOBHM icons DIAMOND HEAD will be teaming up with fellow genre-mates RAVEN for a US tour. It is unclear as to whether these are all of the dates or if more are on the way, but if you get a chance to see them you definitely should. I mean c’mon…Metallica covered a bunch of their songs, though granted those songs were from an era with Sean Harris on vocals and not Nick Tart but that shouldn’t matter much because Nick does a pretty damn good job. Plus, this is a U.K. based band, which only recently played the states for the first time in 20 years! You might not get another chance people…just sayin’.

Two shows that I want to highlight in particular are the October 17th and 20th dates. Why do you ask? Because there is a band called Night Demon opening! This is a new band with that same NWOBHM sound. If you didn’t know who they were, you’d think they were around when Paul Di’Anno was singing for Iron Maiden. But alas, these guys are fresh out of Ventura County, Ca and could possibly be the ones to carry that NWOBHM torch (even though they’re American). You will most likely be hearing more about them from me in the future, I really dig these guys! Haven’t had a chance to see them live yet, hopefully I will be able to fix that in October.